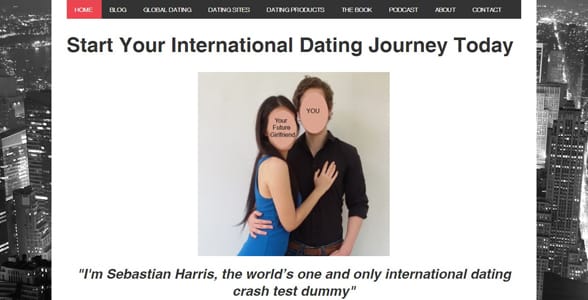 The Short Version: Sebastian Harris, aka the Global Seducer, hasn’t always felt comfortable talking to women. At one point, Sebastian Harris was just plain terrified of opening his heart and being crushed by his crush. However, through years of personal growth, he built up his confidence, recovered from his lowest low, and found happiness in the arms of a loving woman. Now he wants to help others go from self-sabotaging insecurity to romantic bliss. Since 2014, Sebastian has coached single men in one-on-one sessions and shared helpful dating resources on his website.

Sebastian Harris reviews dating products, writes seduction tips, and shares his experiences via multiple platforms to let single men around the world know that they don’t have to face their dating challenges alone.

Dating coach Sebastian Harris can relate to insecure singles because he was once just like them. He’s an average German guy who has battled insecurities, made dating mistakes, and come out the other side. He doesn’t look like a model. He doesn’t have an extroverted personality. And yet he’s living his best life with a beautiful woman by his side and a flourishing career as an international dating expert.

How did that come to pass? With a lot of growing pains. Sebastian is very open about his journey from emotional wreck to relationship guru. He was born premature with a congenital heart defect. He underwent three heart surgeries before the age of 13. These surgeries left him scarred and afraid no one would ever find his body attractive.

When he was 17, he worked up the nerve to ask a girl in his class out on a date, and she laughed in his face. “You are disgusting!” she told him. The next year, he wound up in a toxic relationship with someone who didn’t treat him well, but he didn’t think he could do any better.

Finally, after four years of misery, Sebastian decided it was time to change. With the support of several mentors, he began traveling across Southeast Asia, Europe, and South America in search of love, knowledge, and self-improvement. In 2014, he got involved in the dating coaching industry and came into his own as a dating and relationship expert known as the Global Seducer.

“The reason why I have such a strong connection with my readers is because I do not make up a story,” he said. “I don’t have to. I’ve been through a lot, and I only share my experiences.”

Today, Sebastian Harris has coached men from all over the world, primarily in the US and Europe. A solid third of his clients are college-aged men seeking dating advice to help them as they enter some of their most sexually active years. He also sees a fair number of recently divorced men hoping to get back into the dating game but who are feeling apprehensive about how it’s changed over the years.

Another third of Sebastian’s clients are career-driven men in their late 30s to early 40s. These professionals have typically thrived in the business world and fallen short in the romance department. Many of them work in male-dominated professions, including computer programming or engineering, so they don’t have many avenues in which to interact with women day to day.

Sebastian said he enjoys working with more mature, rational, and business-oriented individuals because they’re open to solutions and willing to change their habits. “Their experience in business taught them that coaching can be extremely valuable,” he said. “And the more open you are, the easier it is for me to help you.”

Sinn – How to get girls to chase you