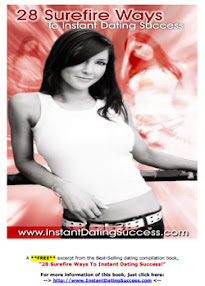 I shouldn’t have to say this, but it’s true: Remember, you and only you are responsible for your actions and behaviors. To be crystal clear – the author and publisher of this book disclaim any responsibility for how you choose to use this material. It’s always your responsibility to make sure that the actions you take with women are legal and consensual.

Guys, these tips don’t matter to you until you get your head on straight. Keep your head about you when you’re out there in the dating and seduction world. Remember that all of these tips work when you’re a man who can relax in his own confidence. I’ve been teaching this stuff to people for years. I help men every day through my newsletter, ebooks, and audio programs. I now offer a complete male self-confidence program at http://www.alphaseduction.com where you will learn the Secrets of the Alpha Man and how you can take control of your life – and your sex life.

The most important tip will probably go unmentioned and unnoticed, but it is simply this: Get out there and DO SOMETHING.Be willing to jump in and make mistakes. The man who can put aside his fragile ego and just get as much experience as he possibly can is going to WIN at this game. Hands down, game over, zip up your pants.

All you have to do is be willing to TAKE ACTION. A great martial artist was once asked, “Master, what is the secret of great kung-fu?” To which he replied, “Don’t make mistakes.” And the apprentice asked, “How do you learn how to not make mistakes?” To which the master replied, “Make mistakes. Make LOTS of mistakes.” In the immortal words of the un-nameable shoe company: JUST DO IT.

Carlos Xuma is well-known by just about any guy who is interested in getting better with women. A major contributor to his considerable popularity is his authenticity. Carlos is all about helping men be the best they can be, and it shows. Listen in as we deal with a topic that consistently derails both men and women when it comes to dating success. Find out what “games” really are, how to identify them and…most importantly…how you can finally deal with them effectively. Never be anyone’s fool ever again.

Carlos Xuma writes about dating challenges and how to overcome them, all from the man’s perspective. He understands that women have shared information on how to rule the world of relationships since time began. They rule through sexual power and an innate understanding of psychology and persuasion.

You need an ally in this game, and Carlos is here to give you that winning edge. The methods and techniques you learn in his various programs teach you how to be more successful with women by winning at your INNER game. Inner game is the sense of selfconfidence and self-esteem that a true Alpha Man feels when his life is together. He has goals and a purpose.

And if a man is going somewhere in life with a passion, women will want to be a part of that lifestyle. No deception, tricks, or hypnosis. You learn how to succeed with women by being the best man you can be – from the inside out.

Carlos Xuma is the author of The Dating Black Book and Seduction Method e-books, along with the Secrets of the Alpha Man and the Approach Women Now programs. He also produces and records the Advanced Audio Coaching each month – now in its third year!

Carlos Xuma also teaches Seminars in the San Francisco Bay Area for men looking to reconnect with their masculinity and become more successful with women – both field work as well as workshops.

According to Xuma he started out studying the social dynamics and interaction between men and women. This lead him to integrate his martial arts training and Eastern philosophy into a system of explanations and metaphors of human interaction and motivational explanations.
Background

Xuma’s core idea is the Alpha Male, who displays masculine and leadership behavior. According to Xuma, this personality types incorporates useful traits, such as emotional and social intelligence, ambition, verbal acuity, and a keen perception of character. He encourages men to communicate their masculinity and sexuality with both techniques (model verbal and physical actions) and confidence-building to ensure that they are achieving authentic attraction.
Advice on Attraction

Carlos Xuma argues that most of the problems men face in romance and attraction stem from a gender disadvantage: women are socialized to be collaborators and communicators from early childhood, while men are socialized as independent and competitors. His instruction aims to rehabilitate of a man’s self-confidence.

Carlos Xuma describes the three primary parts of a man’s masculine confidence as:

1) Self-esteem (how worthy a man views himself),

2) Self-image (the roles or actions a man can and cannot envision himself performing), and

3) Self-confidence (how certain a man is about his world and abilities in general.)

Furthermore, three parts appeal to a man’s attractiveness to women:

3) Sense of humor. These are referred to as the “Three S’s,” and they form the framework of a man’s approach to interaction with women.

Carlos Xuma contends that men in the post-feminist era (born after 1970) lack advantage with women in terms of socialization. Due to the proliferation of media images and – as Xuma states – “Disney programming,” men are confused as to their gender roles and to what women find genuinely and uniquely attractive about men. These attractive qualities, Xuma states, have not changed – only undergone an evolution.

As the internet came along and the seduction community exploded in 2005 to 2006, Carlos Xuma continues to stay focused on natural game by drawing out authentic personalities to attract women, and creating your entire Alpha Lifestyle.

A lot of guys read too much into how to get a girlfriend. In truth, starting a relationship with a nice, good-looking woman is not that difficult, so long as you don’t blow it right from the start.”

“One of the biggest factors in how to get a girlfriend is not what TO do, but rather what NOT to.”

“So just remember that women need to be touched quickly and confidently when you first meet them. This triggers instinctual responses in her that tell her that you are a sexual man, and that she should forget about the “friends zone” with you.”

How To Get Laid Now

Love Systems – The Ultimate Guide to Text and Phone Game

Quick View
Out of stock